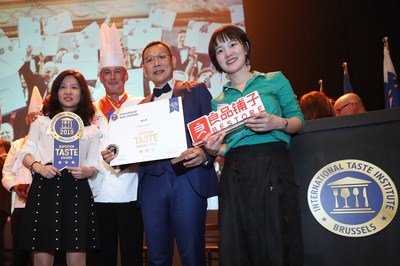 China’s snacks from BESTORE won the “Oscar” award in the international food industry.


Located in Brussels, Belgium, known as the "Capital of Europe", the International Taste Institute is the world leader in the evaluation and certification of consumer food & beverages by professionals. Each year, products participating in its taste evaluations and scoring above 70% are granted the "Superior Taste Award". This honor represents the highest standard of taste and is regarded as the "Oscar Award" in the food industry.


Chinese snacks brand BESTORE participated in the evaluation this year, which consists of a blind taste test by more than 100 Le guide Michelin masters, who were unaware of the products' brand names, the producers' names or the origin of the products, and evaluated and scored products based on first impression, vision, olfaction, taste, texture (food) or final sensation (drinks). BESTORE's crisp date won the three-star "Exceptional Products" award at its debut in the evaluation, scoring above 90%.


At the awarding ceremony, Coxon Alan, British Ambassador for Food/Drink and a jury member of the award,&n

bsp;said that he was impressed with the award-winning shredded beef by BESTORE. "The beef is very chewy, the texture of the flesh is clear to see, and its flavor is completely preserved."


In recent years, a new generation of Chinese brands have been gradually rising to the world stage, expanding footprints overseas and competing on the international market. Chinese snack brands are no exception. In April 2018, BESTORE started its overseas business by joining in Alibaba's "Tmall's Going Out" online campaign and selling products in overseas Chinese supermarkets and stores through agents at business end offline. So far BESTORE has brought more than 100 delicious snacks into more than 20 countries and regions including Europe, North America, Australia and Southeast Asia.


Established in 2006, BESTORE is a leading Chinese brand of casual food committed to providing high quality food. With the persistent pursuit of quality and value, BESTORE has become an internationally recognized Chinese brand boasting its selection of healthy ingredients and craftsmanship.