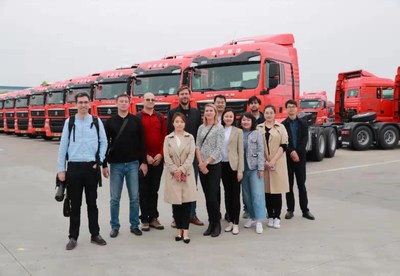 "Without the reform and opening-up policy, the companies [like those we visited] would not have grown so rapidly," said Zigor Aldama Gonzalez, a journalist from the Spanish Colpisa News Agency, adding that China should continue to advance the policy.

At the Sinotruk, the interview group learned about major truck models on the market including the Howo and Sitrak, the history, business focus and efforts in innovation of the company.

At Festo, they gained a glimpse of the vitality of the time-honored German company in the inland city of Jinan. The workshop is clean and tidy, measuring 48,000 square meters. Production was highly automated and only a few employees were found on the scene, the journalists said.

The visits were part of a four-day program named "New Shandong Momentum Marks a New Day for China's Opening-up," which invited foreign journalists to Shandong for extensive interview activities.

Jointly launched by the Information Office of the Shandong Provincial People's Government and China Report Press, the program aims to facilitate the international community to better understand the economic and social development in China as the province is welcoming the Qingdao Multinationals Summit scheduled for October 19-20.