At the symposium, the young scientists selected in 2017 shared the outcome of their research work, challenges and issues involved, and the direction for their future work. 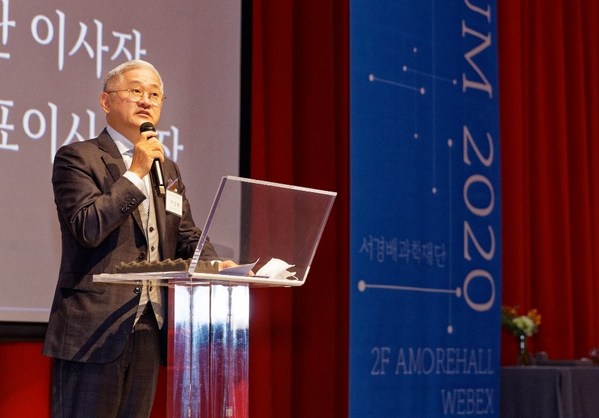 Professor Kim Dohoon (University of Massachusetts Medical School) together with 100 young scientists and students abroad joined the symposium online through Webex and YouTube.

"Many scientists, including myself, were impressed by the Suh Kyungbae Science Foundation supporting outstanding young scientists. First-generation Korean scientists had to work their way up in harsh conditions to take a step forward, but I believe the young scientists of today will go further and reach higher with a good foundation," said Professor Koh Gouyoung in his keynote address.

The symposium also featured the certificate award ceremony for young scientists of 2020 chosen by Suh Kyungbae Science Foundation: Professor Roh Sounghun (Department of Biological Science, Seoul National University), Professor Lee Joohyeon (University of Cambridge, Wellcome - MRC Cambridge Stem Cell Institute) and Professor Cho Wonki (Department of Biological Science, KAIST). "Through the light, we have explored a small universe named the cell and hopefully, our work will contribute to improving the quality of life for everyone in the light of the philosophy of the Suh Kyungbae Science Foundation," said Professor Cho Wonki in his acceptance speech.

"The support of the Suh Kyungbae Science Foundation allows for promising, young scientists to be discovered and to provide them with an opportunity to play their potential to the fullest. This symposium also helps them broaden their horizon beyond their research area and build up a fund of knowledge for even greater discoveries," said Director Oh Byungha (Department of Biological Science, KAIST) as he offered his congratulatory message.

In the afternoon session, young scientists selected in 2017 shared the outcome of their latest work and discussed the direction for future work:

"Four years ago, we set up the foundation for the advancement of biological science with a strong belief that there are enormous opportunities and potentials underneath those things we get to see. We are committed to creating an environment where creative young scientists can fully immerse themselves in their work, and we will fulfill our role as a reliable partner for their research journey toward a brighter future for mankind," said Chairman Suh Kyungbae.