BEIJING, Oct. 31, 2019 /PRNewswire/ -- On the afternoon of October 25th, 2019, Blancpain, the innovation-focused premium Swiss watch brand, announced the winner of the 2nd Blancpain-Imaginist Literary Prize in Beijing, in association with Imaginist Press, a Beijing-based publishing house. The literary prize, which aims to create an authoritative, influential, ongoing, international dialogue, was won by Huang Yuning for her collection of novellas and short stories "Eight and A Half", which was published in August of 2018. 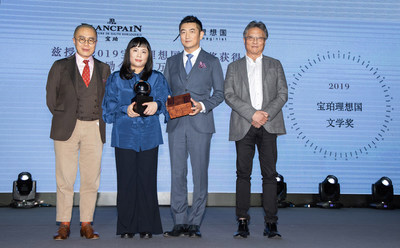 The winner was jointly selected by the judge panel of the second Blancpain-Imaginist Literary Prize consisting of Dai Jinhua, Huang Ziping, Jia Zhangke, Lu Nei and Zhang Dachun. Mr. Zhang, on behalf of the judge panel, delivered a speech during the awards presentation ceremony, saying: "Ms. Huang tells short stories in rich and vivid detail, thanks to her profound literary accomplishments and insight into humanity and interpersonal communication. Diversity in the themes of her works also demonstrate the winner's excellent competence in mastering both the essence of modern Western novels and Chinese writing skills." Blancpain's culture ambassador Leung Mantao presented the Blancpain-Imaginist Literary Prize trophy, in itself a work of art by well-known designer Lu Zhichang, to Ms. Huang. The literary prize also includes a cash award of 300,000 yuan (approx. US$43,675) and a classic Villeret wristwatch courtesy of Blancpain.

Swatch Group China Management Committee Member, Vice President of Blancpain China Jack Liao was also present at the award ceremony. He stressed during his presentation: "Young generations are the future of a country. The presence of many talented and vibrant young people are vital to ensure a rosy prospect for literature. Young writers need an venue that enables them to draw the attention from the reading public, in addition to ongoing encouragement and long-term support."

The founder of Beijing Imaginist Time Culture Co., Ltd Liu Ruilin pointed out: "Everyone has his or her own thoughts on what literature means today. It gives voice to the people who want to express their opinions about certain aspects of life or can be seen as written records of different eras. More importantly, I think literature can transcend the limits of an era or a life. I sincerely hope that this prize will keep moving forward for the next decade or two decades and we'll see the great significance of the prize to Chinese literature. We're looking forward to that day and will keep working diligently to that end."

Ms. Huang said: "Thank you to the judge panel for awarding the prize to me, a middle-aged woman who started writing in her 40s.To be honest, I didn't know how much effort I would put into my writing previously, but now I have the answer. I will become more committed to my writing career."

Huang Yuning's Eight and A Half: I have never wanted to be China's Atwood

In 2018, Ms. Huang, whose expertise covers translation, publication and criticism, completed the transformation from a literary preacher to a novelist with Eight and A Half. The collection, the title of which is reminiscent of Fellini's masterpiece of the same name, contains eight short and medium-length stories, as well as a full-length work of non-fiction inclusive of a fictional element. Ms. Huang said that when writing novels, she likes to create characters living in an environment which is quite different from her own.

Ms. Huang said that she had an impulse to fabricate since childhood, though she only started to do so in her 40s. However, the writer, who is very familiar with modern and contemporary Western literature, already demonstrated her excellent writing talent in her first novel, in which she engaged in complicated and delicate narrative experiments. As Li Jingze said, Ms. Huang is "too international". The Shanghai native who has lived there for most of her life did not, like many of her peers, set her own banner with distinctive local characteristics within the context of a Chinese contemporary literature already replete with literary works full of local flavor. In addition, Ms. Huang avoids "translationese" in her writing. As Huang Ziping said, "This is a work of pure Chinese writing without 'translationese', something that is indeed very rare."

Eight and A Half has a core theme: media. Modern or pre-modern media including mobile phones, WeChat, magazines and TV all constitute narrative carriers connecting gossip and social news in modern urban society, with a similarity to "Black Mirror" science fiction fables. According to Ms. Huang, who has been a literary critic for more than a decade, what she wrote is a new type of interpersonal relationship and desire structure based on the Internet and other media, deception and self-deception, role and role dislocation, questioning the fate of novels in the future.

Judge Huang Ziping spoke highly of the originality of Eight and A Half as a collection of novels as well as its focus on the important theme of "media", "Huang Yuning has written eight novels, each of which an independent short story with its own pivot and path of plot development. This is an original collection of novels rather than an anthology after years of accumulation, so each one is quite true. The collection reflects what she is most concerned about, especially the media. She is not willing to follow a single path when formulating each novel but endeavors to make every story different. In each of the stories, she portrays the theme that makes us more anxious today from different angles and viewpoints."

In an interview with a media organization after winning the prize, Ms. Huang reiterated the profound influence of her predecessors on her writing, but said that she doesn't want to simply follow their steps, "Writing starts from reading. Atwood and McEwan do have an influence on my writing in terms of technology and concept. This influence has always been reflected in every aspect of my writing, but I don't want to be the second Atwood or McEwan, as it doesn't make sense to copy a person. China does not need an alternative McEwan or Atwood, and I need to find my own voice."