BEIJING, Oct. 26, 2020 /PRNewswire/ -- iQIYI, Inc. (NASDAQ: IQ) ("iQIYI" or 'the Company'), an innovative market-leading online entertainment service in China, announced that its original series The Bad Kids won the "Best Creative" award (the "Award") at the 2nd Asia Contents Awards. The Awards is organized by the 2020 Busan International Film Festival was held in Busan, South Korea on October 25. Rong Zishan who was featured in the TV show won the "Newcomer Actor" award. Other drama series that were nominated for the award of "Best Creative" include Netflix's Crash Landing On You, JTBC's The World of the Married and Taiwan CTV's Someday or One Day. The Bad Kids became the first Chinese TV series to win the award of "Best Creative" at the Asia Contents Awards. 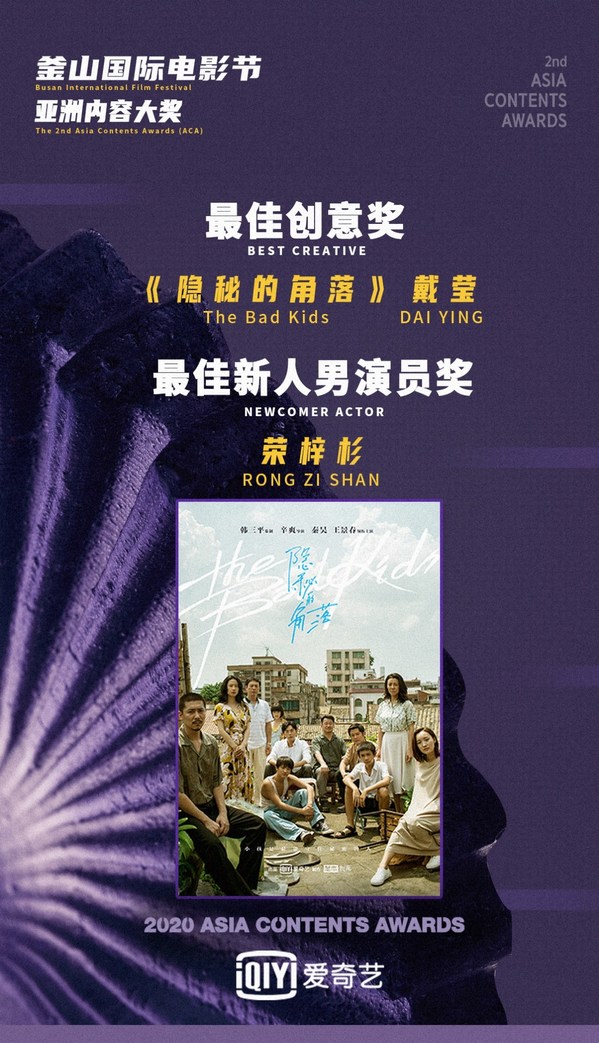 The Bad Kids is a 12-episode suspense drama produced and released by iQIYI in 2020. During its run in China, the show produced 216 trending hashtags on Weibo and received a WeChat index of 26.13 million. The Bad Kids was rated 9.2 out of 10 by over 200,000 people on Douban, an influential Chinese social media platform known for its movie and TV show reviews. The Asia Contents Awards is an international film and television award that is presented by the Busan International Film Festival. The Awards recognizes outstanding Asian content from TV, OTT and other diverse platforms that have been released in the past year from 14 Asian countries, as well as talented producers, writers and actors in the Asian film and TV industry.

Mr. Sunshine, a drama series directed by South Korean screenwriter Kim Eun-sook, was last year's recipient of the Best Creative award of the Asia Contents Awards. The series became the highest-rated Korean cable drama in TVN's history with an 8.9 rating and scored a 8.9 on Douban in China. iQIYI's original suspense drama The Bad Kids winning this year marks a new milestone of Chinese drama series' entrance into the global market. Led by iQIYI, Chinese streaming platforms are increasingly capable of producing original productions of international standards. This represents a growing phenomenon of Chinese productions 'going global'.

"On behalf of iQIYI, the creators and the crew, I would like to thank the jury, for the honor and affirmation given to The Bad Kids," said Dai Ying, Vice President at iQIYI who heads up the company's original drama division at the awards ceremony. "It has a unique perspective, and we are trying to bring new ideas of this type. It will be our privilege if you can remember the three little children who came into our world and inspired us to thinking in this summer. Thank you for everyone's love for this show."

As China's leading streaming media platform, iQIYI is committed to producing high quality of content and innovating content formats such as drama series and variety shows. So far, a significant number of iQIYI original series such as Tientsin Mystic, Burning Ice, Tang Dynasty Tour, The Thunder, The Golden Eyes and The City of Chaos have won numerous awards at overseas festivals such as The New York International Television Film Festival, the China-U.S. Television Film Festival and the Seoul International Television Festival. iQIYI is dedicated to making more international viewers feel the unique charm of Chinese film and television works through its diversified and high-quality entertainment content.